Skip to content
The Elements of Music From “sound” to “music”

How do we get from “sound” to “music”? We might say that the place in between is “noise”.

Look at the following definitions, of “sound”, “noise”, and “music”. Focus on the words in bold, as they indicate the main differences between the three.

A form of energy produced when things vibrate

Examples: One finger snap, a door shutting, a glass put down on the table, the car starting up…

Continuous, irregular sound, or many continuous sounds; usually considered to be displeasing

Examples: The sound of a radio when it’s not on a station; lots of people talking all at once in a room…

Continuous, organized sounds that are usually pleasing, at least to some people

Any sound, noise or music generates sound waves. There’s an instrument called an oscilloscope that lets us visualize these sound waves.

Look at the three illustrations below, generated by a virtual oscilloscope.

In the first illustration, you see the waveforms generated by one finger snap. In the second, a plastic object was put down on a table. The third is a sung note.

Can you see how the third waveform is more regular? How the other two waveforms look more random? 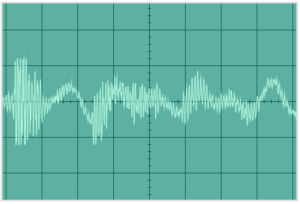 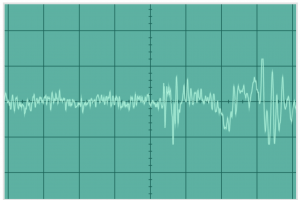 Object put down on the table (random waveform)

Try it yourself below! Try singing, making animal noises, hitting objects together. You can freeze the waveforms using a tick box (“freeze live input”) on the right. Do you notice which waveforms seem more regular? What were you doing when you noticed a regular waveform? Were you making music? Was it another sound that generated a regular waveform, but wouldn’t be considered music? (If it doesn’t work, just click on the link at the right to go directly to their website. You’ll need to let the site access your microphone.)

When and how do “sound” or “noise” become “music”?

One way to define music (as opposed to sound) is that it is more “pleasing” to listen to. That’s a tough one to determine, though, because we don’t all like the same kind of music!

An easier way to think about the difference is that music is “ordered”, and noise is not (intentionally.)

However, there is actually a genre of music called “noise music”. It’s usually kind of dark, and not everybody agrees that it IS music. When composers experiment with sound, the line between “noise” and “music” can sometimes get very thin.

Some musicians have a sense of humor about including non-conventional instruments in their performances. In 1973, Barbra Streisand did a television special, and some unusual instruments made their appearance. Take a look!

Take this little quiz to see how much you remember about sound, noise, and music.

Download the mindmap and print it out. At the end of the course, you'll be asked to fill in the missing pieces of the mindmap... minus some terms.
Download
Previous Lesson
Back to Course
Next Lesson