Pitch is how high or low a note is.

Go to the “Extras” to check your understanding! 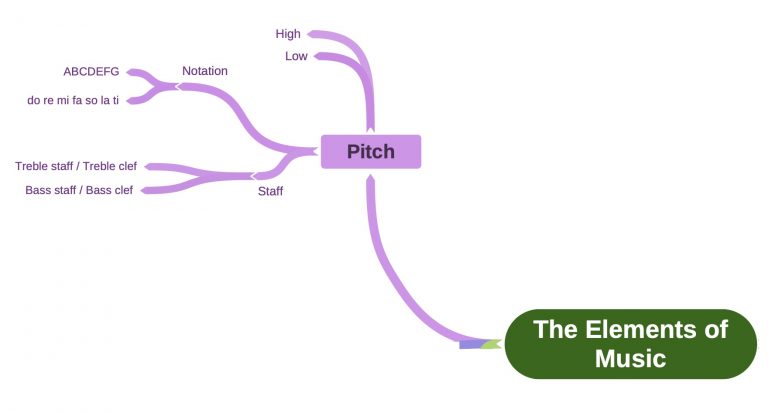 Watch this video. It explains the notion of “pitch” in a simple, straightforward way.

We use a musical staff to place notes on, so that we can see visually whether a note is high or low. We can also see its position in relation to other notes in a visual way.

There are two systems for naming notes on a staff. The first, invented by Guido d’Arezzo during the Medieval Era (around the year 1000) is: do, re, mi, fa, so, la, ti, do. Later, around the 6th century, another system was invented, using the letters A, B, C, D, E, F, and G.

Below is a chart showing the notes on a grand staff. A grand staff is a double staff, with a treble clef (high) on the treble staff, and a bass clef (low) on the bass staff.

Instruments and voices can be high, low, and everything in between. Women usually have higher voices than men (but not always.) Below are two videos highlighting singers on “The Voice” who have amazing low or high voices. Note that the high notes in the second video come near the end of the songs, so listen all the way through.

Some examples of high instruments are the piccolo (like a very small flute) and the celesta. Listen to a piccolo, in “Baby Elephant Walk” by Henry Mancini. Then listen to “Hedwig’s Theme” from Harry Potter, written by John Williams. The celesta plays the theme. It’s an interesting instrument; it looks like, and is played like, a piano but inside, instead of the hammers hitting strings, they hit metal bars. This gives the celesta its unusual sound.

Below are some games that you can play, to see whether you can name the notes on the staff, and if you know the note names on both the treble and the bass clef.

Download the mindmap and print it out. At the end of the course, you'll be asked to fill in the missing pieces of the mindmap... minus some terms.
Download
Previous Lesson
Back to Course
Next Lesson
Tags: elements of music, music, pitch